Billy Hatcher and the Giant Egg Wiki
Register
Don't have an account?
Sign In
Advertisement
in: Bosses, Antagonists, Crows, Characters

Captain Glur is the boss of the stage Pirate's Island.

Around the time of Billy's arrival, Glur, along with Era Gecko, Topo, Moles, Saltim, and Dark Corvo came to the chicken world as per Dark Raven's request. Captain Glur settled on Pirates Island, claiming it as his domain.

Captain Glur is a fat, blue anglerfish wearing pirate's gear. He has two red markings on his face, and white whiskers on either side like a catfish. Being an anglerfish, he has an attachment that leads to a small light lure (esca). On the back, he has purple fins and a plump tail, consisting of a bottom fin and the tail fin. His back is also in a cyan color, but is barely visible. He wears a red pirate coat, which a white belt with a golden buckle is tightly wrapped around it and as well as his belly, a dark blue pirate hat with the crow emblem, and a red spiked collar. His "hands" consist of a water cannon and a hook. His water cannon shoots out water, but his hook does not do anything. In the boss battle, it is shown that he has the power to completely merge with water and can also turn invisible as well.

As you arrive, he will materialize and laugh at you. His main ace is to shoot blobs of water at you (which can severely damage your egg so you should avoid) and jump out of the water randomly. Hitting him normally is a pretty bad idea as you and your egg could get trapped within his hitbox. Mainly all you should do is perform the egg shoot a bit close to him to retrieve your egg if it somehow gets stuck. As with all other boss fights, the eggs do not contain anything, so you should not try to hatch them. At the end of the battle the crows that made him will fly away.

Captain Glur appears as the regular boss of Pirate's Island and makes a second appearance as a shadow against Dark Corvo. 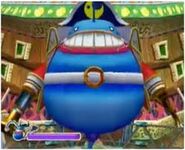 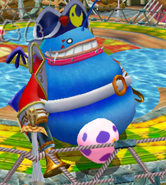 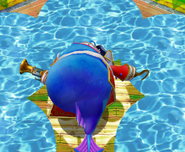