Billy Hatcher and the Giant Egg Wiki
Register
Don't have an account?
Sign In
Advertisement
in: Bosses, Antagonists, Crows, Characters

When Dark Raven came to the Chicken world, shrouding everything in darkness, Era Gecko took residence in Forest Village. It terrorized the local Chickens and ensured that Chicken Elder Oma-Oma stayed imprisoned in a golden egg.

Despite being a minion of the Crows, Era Gecko has a reptilian appearance, hence the word gecko in its name. It has a tribal look, with orange marking around the eyes that resemble face paint, a leather pouch and vest, and a fur pelt tied around its neck hanging over its back. It has a red spiked collar, leather wrist and ankle wraps, and bandages wrapped around its lower arms. It has a purple and green striped crest and long ears striped light purple and dark purple on the inside. Its small black wings giveaway that, despite appearances, it is a crow through and through.

Its battle starts out with it hiding out in the grass. Billy can roll over the grass with his egg, eventually revealing Era Gecko's hiding spot, exposing it and leaving it vulnerable for a short amount for time for Billy to attack.

It then gets back on its feet and attacks, invulnerable to damage at this stage. It attacks Billy with an easy to dodge tail shock wave and slightly more difficult to dodge light beams. After its attacking period, it sprays water out of its mouth, regrowing the grass, and goes back into hiding. As its health goes down, its period of vulnerability gets smaller. 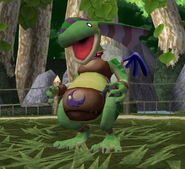 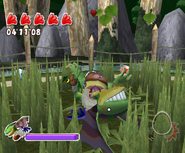