Billy Hatcher and the Giant Egg Wiki
Register
Don't have an account?
Sign In
Advertisement
in: Chicken Elders, Characters

Oma-Oma is the Chicken Elder of Forest Village. He is the first elder Billy encounters on his quest.

After saving him from his curse as a golden egg, Oma-Oma emits a loud crow which brings back sunlight to Forest Village. He thanks Billy and rewards him with an Emblem of Courage.

After you defeat Era Gecko, Oma-Oma informs you that the other chicken elders are still golden eggs, and pleads for you to save them in order to bring back morning over the world.

Elder Uri-Uri is a large white chicken with dark green tipped feathers. He has a large, red comb atop his head, a yellow beak, and yellow feet tipped with white claws. On his face grows a long grey beard and bushy grey eyebrows. He wears a light green robe with a faint Emblem of Courage pattern on the front. He also wears a red scarf tied around his neck. 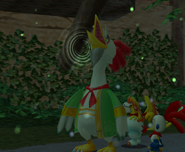