Billy Hatcher and the Giant Egg Wiki
Register
Don't have an account?
Sign In
Advertisement
in: Egg Animals, Characters

Runny is an animal companion Billy can hatch from eggs. Its egg is orange with horizontal striping. It can use a strength attack in which it charges forward in multiple flips, damaging any monster it runs into.

Runny looks like a mix between a turtle and a bear. It is orange with white fabric wrappings on its arms and feet and a large orange shell on its back. It wears a red handkerchief around its neck and a small red bow on its head.

Runny attacks only when commanded by Billy. It stomps forward in a straight line, growing larger after each stomp. It then grows huge and stomps the ground kicking up puffs of smoke, damaging enemies around it and also destroying any obstacles that may be in the way.

Runny can be found in Pirates Island Mission 5, on the platform before the anchor swing bridge. Its egg is also found in many other levels, helping Billy to complete objectives and earn Emblems of Courage. 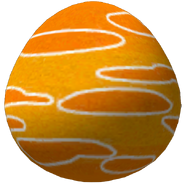 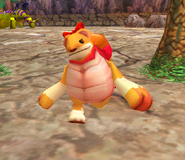