Billy Hatcher and the Giant Egg Wiki
Register
Don't have an account?
Sign In
Advertisement
in: Chicken Elders, Characters

View source
watch 01:36
We're Getting Mutants in the MCU - The Loop
Do you like this video?
Play Sound

Uri-Uri is the Chicken Elder of Pirates Island.

After saving him from his curse as a golden egg, Uri-Uri emits a loud crow which brings back sunlight to Pirates Island. He thanks Billy and rewards him with the Emblem of Courage.

Once Billy defeats Captain Glur, Uri-Uri explains that Dark Raven, the main antagonist, is reborn every 100 years and is the one that turned him and all the other chicken elders into golden eggs. He urges Billy to save the other elders and prevent Dark Raven's evil goal to engulf the entire world in darkness.

Elder Uri-Uri is a large white chicken with dark blue tipped feathers. He has a large, red comb atop his head, a yellow beak, and yellow feet tipped with white claws. On his face grows a long black beard and bushy black eyebrows. 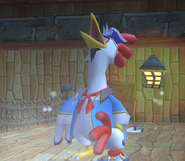 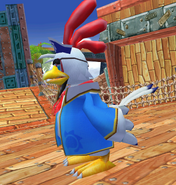 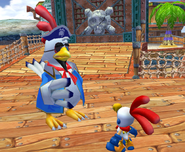 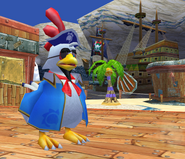